The modern workforce needs a drastically different kind of classroom, but current "reforms" aren't cutting it. 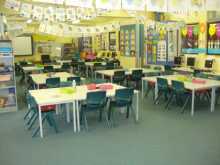 I’m a teacher and blogger, and as such I sometimes feel like I’m straddling a generational divide. On one hand I go to work every day and teach in a classroom that looks remarkably similar to one a hundred years ago. The board has turned from black to white, and I’ve pushed the desks out of their rows and into groups, but a child from the 19th century could walk in and recognize it for what it is. Can the same be said of the workplace? My other workplace is a coffee-shop, library, livingroom, or park bench; any place that I can get a wireless signal. I teach my students how to write from a model, how to use a school database, and how to use notecards during a speech. However, I get home and I research by surfing the news outlets on my smartphone, I write from a perspective (not a model), and if I present something I use slick presenting tools and I never look at a notecard. This begs the question, “What are we really preparing our kids to do?”

A recent article in Tech Crunch by Nick Cronin highlights the advent of the independent worker. The 21st century workplace is not a place at all, and brick and mortar locations are becoming less relevant in a world where the necessary tools for the job fit in a single bag. Technological progress is such that a smartphone, a laptop or tablet, and a wireless signal is enough to do an increasingly wide range of jobs. In addition, companies are finding that maintaining a conventional workforce is not as efficient as it once was. As Cronin points out, “Labor efficiency is about having the right workers for the tasks which need to be accomplished.” That said, companies are beginning to realize that simply hiring out projects to independent contractors, who are no longer on the payroll when the project is completed, is a much more efficient and budget-conscious manner of running a business. With the recent economic recession, a number of businesses that may have been a longer time coming to this conclusion were, instead, forced into the idea of contracting out. In this way the “do more with less” mentality may have expedited a workforce shift that has been coming all along.

How do schools then, which are cemented in a rigid, formalized educational structure, retrofit themselves for the 21st century work”space”? How do schools that are increasingly putting a premium on standardization and “meter-sticking” going to teach kids that those skills, although important from a life-long learner’s perspective, may not serve them in a modern career?

First of all, the teacher-focused classroom, where desks are all in rows facing the front of the room where, presumably, the teacher is lecturing, is so bygone as to be embarrassing. Instead, the independent worker of the future needs to learn how to drive their own growth and development, and we do this by teaching intrinsic motivation. Teachers can show students what they need to know, but they need to impress upon students why they need to know it. In addition, students need to drive their own learning. Call it “inquiry-based”, “student-driven”, or whatever you want to; teachers need to mentor students, students need to teach themselves.

Technology is expensive for schools struggling with dwindling state aid, increasingly dependent populations, and innovation-crushing standardization. However, it’s also necessary. Students must have the current technology in their hands so that they can become proficient in using it. Technology used to leapfrog in terms of years, but now it can be in a matter of months. For that reason, students have to feel confident in their ability to utilize technology to solve problems, and have to feel proficient enough to be adventurous in the ways that they approach technology. Forget banning cellphones in class. Figure out how to integrate smartphones into the curriculum.

Finally, don’t tether yourself to the school. The workplace is increasingly less relevant in the 21st century. If schools are preparing kids for the workforce, schools should reflect that as well. It’s difficult and there can be a number of legal and logistical hurdles in doing this, but students must have the confidence and understanding to navigate their world. Whether it’s in the form of field trips, community service, or some other endeavor, students must be thrust out into the community so that they know what “community” is. They need to feel that they are a part of the larger world, so that it will be reflected in the choices they make, and the paths they choose for themselves.

We are doing an incredible injustice within education by moving toward the kind of assembly-line standardization from which the rest of the 21st century workforce is moving away. Just as we have, kids will learn and adapt, and the workforce of tomorrow is not going to collapse for lack of educational support. However, with the premium put on fixing schools, reforming education, and setting the next generation up for success, don’t we owe it to them to teach them the right things in the right way? No workplace is going to concern itself primarily with reporting how well an employee is performing. Instead, it’s going to concern itself with the quality of the work the employee produces, and with the ability of that employee to self-start. In the same way we should not be concerning ourselves in education with the report of a students work, but with the quality and manner of work they can actually produce. Success is the means, and will likely be the end as well.


Cities Are People Too


The Country Has Been Consistently Divided Since The 1970's