The Country Has Been Consistently Divided Since The 1970's

The Country Has Been Consistently Divided Since The 1970's

A new study shows that political polarization has been roughly the same for the last 40 years. 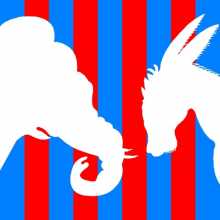 A new study shows that political partisanship may be closer to a volcano than an earthquake. Partisanship, or the divide inherent between the liberal left and conservative right, has not changed significantly over the last 40 years. Instead it seems that there are occasionally eruptions of very public opposition (often around election years, unsurprisingly) that hints at the level of political vitriol bubbling beneath the surface. It’s not an increasing friction between political ideologies that causes a public earthquake of polarization only to calm once the tensions have eased. Nope. We’re pretty much constantly at odds.

The Society for Personality and Social Psychology in San Diego states that political polarization is actually fairly consistent as far back as the early 1970’s, at least as far as the general public is concerned (the results do not include pundits, politicians, or media outlets). More importantly, the study finds that those that identify most strongly as Republican or Democrat also have a significantly higher tendency to overstate or exaggerate political polarization. Stated another way by study researcher John Chambers of the University of Florida, “Strongly identified Republicans or Democrats perceive and exaggerate polarization more than weakly identified Republicans or Democrats or political independents.” That might seem like a “duh” statement, but there’s more to it.

The team studied data available from the American National Election Survey from the years 1970 through 2004, working with between 4,000 and 26,000 respondents on various questions. The questions in the survey ranged from questions about taxation and healthcare to women’s rights and how they feel a “typical” Democrat or Republican would feel on each issue. Using both measures, they were able to see how respondents differed on actual and perceived degrees of polarization. The demographic whose perceived degree of polarization was closest to the actual degree of polarization were political independents. On the other hand the demographic with the furthest degree between perceived and actual polarization were those strongly identifying Democrat and Republican. Weak-identified Democrats and Republicans fell in between.

A similar study conducted at the University of Colorado asked students to peruse a new school policy that would attempt to lure out-of-state students to the campus by offering perks like first-pick of dorms and classes. The policy press release was a fake, but researchers were able to measure students’ reactions to it, noting that the more strongly students felt about the new policy, the more strongly those students assumed others felt about it. In addition, they gave themselves high marks for arriving at their conclusion with more rational thought and less self-interest than they assumed others had.

These types of studies unravel the idea that “reality is perception”, and that although we may hold some belief strongly, it’s not always the truth of the matter. Both studies acknowledged that the media, however, is a different animal. However, as Chambers advises, “we tend to see the world as divided between blue and red, [but] in reality, the world has much greater shades of purple.”


The Human Psychology of Conflict and Politics