Sound Over Substance: Fringe Fundamentalists And The Internet

Sound Over Substance: Fringe Fundamentalists And The Internet 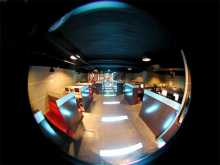 Tim Padgett’s piece in TIME, Having Faith: What Both Hitchens and Fundamentalists Don’t Get About Religion, is a “can’t we all just get along” critique of fundamentalism in all of its forms. Opening with a messy interview with Evangelical David Canton (the guy that demanded Lowe’s pull their ads from the TV show, All-American Muslim) he characterizes the man as a bigot and an Islamophobe (which he is), but expresses amazement that a huge company like Lowe’s would cave to it. He’s critical of all fundamentalists because they take too literal a translation of religion, proscribing their stigma (stigmata?) on anyone that conveniently carries the label. He’s wrong to be surprised by Lowe’s, Canton, or Christopher Hitchens, the so-called “Angry Atheist”. Here’s why.

Any period in history that is seeing great transformation is likely to experience an uptick in fundamentalist jargon and divisive rhetoric. We see it among the religious, as with Canton and Hitchens. We see it among the political, as with the Tea Party and the Arab Spring. We’re even seeing it among the technological, with Anonymous, hacktivism, and the U.S. declaring cyberspace as a “theater of military operation” (as if it ever could be). The crises above are not new. There have always been religious fanatics, whether the religion of God or the religion of “no God”. There has always been political schism (hello, French Revolution). Technology has always caused conflict as well, whether the Luddites or the assembly line, the chariot or the atom bomb.

What’s unprecedented now, and has created a windfall of “opinions” and “facts”, is the exponential increase in the speed of communication while simultaneously eradicating barriers. Unless one is a professional in the field, it’s almost impossible to tell the difference between a pamphlet churned out by a major publisher or printed from some enterprising college kid’s laptop. You can pay a photographer a few hundred bucks for your kid’s picture, or have your friend take it on their iPhone. Amateur movies, video games, music albums, and all of the other things that we used to go to professionals for are becoming increasingly available with a few clicks, or by buying the right app. This is all great and well and “progress”, but it present a problem obfuscation. When everything looks legitimate, how do you separate truth from fiction, fact from opinion phrased as facts, or real socially valid issues from those simply “spun” from the fringes and pimped by media?

We’re in a crisis of social saturation, where people can make anything look legitimate and the loudest and lewdest is often given the greatest platform (to get the greatest ratings). The struggle is to separate honest, productive discussion from the overwhelming din of bullshit perpetually streaming from televisions and computer screens. This used to be the arena of politicians and advertising executives, but now any half-cocked lunatic with a Facebook account and a Macbook can elevate a bigoted message like “Muslims are terrorists” from an errant comment to a national news item.

We are clearly in an age of transformation, a watershed moment in history, and the volume of the dissenters, non-believers, believers, and fanatics and fools is amplified by the very technology creating that transformation: the internet. Sociologists, behavioralists, and anyone with a objective bone in their body can see that we haven't even broken the tip of the iceburg on the technology's ultimate impact on human society. Perhaps it's because of that, that we're all scrabbling so hard for the meaning of it. When someone kicks the anthill, the ants go scrambling.