Judicial ideologues like Scalia and Roberts erode public faith and faith in the U.S. judicial system. 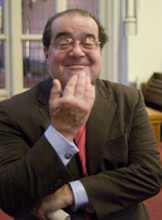 Our judicial system has been built upon a legal oath that promises objectivity and impartiality; on the premise that written laws are the basis by which judgments are made, not ideology or politics. Of course, there are times when the law must be “interpreted” to account for occasional gray areas, but the American public still trusts that judges will attempt to maintain impartiality within that interpretation. Judges that do not, those that make decisions that reflect a particular agenda, so-called “activist judges”, are considered with contempt. That is unless those activist judges are within our own Supreme Court, and are setting the precedent by which lesser courts are to follow.

The U.S. Supreme Court, euphemistically referred to as the “Highest Court in the Land”, has been afflicted with the same ideologically motivated partisanship that the rest of Capitol Hill has experienced. A number of the judges, Justice John Roberts and Justice Antonin Scalia in particular, have created a precedent by which “activist judge” is no longer a bad word. Scalia, who is prone to bouts of proselytizing from his bench, has made very clear his political ideology. During the recent hearings on the Affordable Care Act (Obamacare), Scalia verbally accosted several of the ACA attorneys, comparing the legislation to broccoli in a strange and simplistic rant about forcing people to purchase health insurance. The result was something that sounded much more like Judge Judy than a “The Highest Court in the Land”. Judicial decorum aside, the justices have been pursuing a highly partisan agenda within the Supreme Court, and a couple of its most notorious byproducts clearly illustrate that ideology.

Citizens United – In a landmark decision in 2010, the Supreme Court decided to allow corporations and unions to donate unlimited and non-disclosed amounts of money to organizations that could then support political candidates and campaigns. The decision outraged campaign finance reform advocates, who felt that campaign finance already unfairly benefited corporations “purchasing” politicians. The decision has prompted the formations of dozens of Super PACs that have, in turn, created an industry around billions of dollars in ad campaigns and political lobbying, the majority of which comes from corporate sponsors (the majority of those which support republican candidates and campaigns).

ACA – Although the decisions have not come down from the Supreme Court yet regarding provisions of the Affordable Care Act, the rounds of questioning by many of the conservative judges on the Supreme Court clearly indicated their political stance on the topic. Scalia, as I noted above, was particularly vocal in espousing an ideology around the healthcare reform legislation. As a result, there was little faith that those justices in the conservative majority on the court would remain either objective or impartial in their decision, which will comes out in June.

Strip Searches – The most recent evidence of the “activism” of conservative judges in the Supreme Court is in Florence vs. Board of Chosen Freeholders of the County of Burlington. The case was brought by an African-American man who was unjustly detained for seven days and strip-searched twice, all on account of a computer error regarding a court fine. The emotional aspects of the case aside, the question put to the Supreme Court was whether a detainee for a non-violent, non-drug related crime can be strip-searched. The decision the court passed down on Monday was that a person can be strip-searched for any infraction at all, considering the dignity and the rights of the individual less important than jail security.

Welcome to the United States of the 21st century; where preventing your political opponents from passing legislation is more important than the democratic process, and lifetime appointees to the Supreme Court are ideologues and politicians rather than impartial arbiters of the legal code.


An Argument Against Population Control


Education Reform: Designing The Classroom In The Boardroom