Does anyone else see a perverse sense of priority in this? 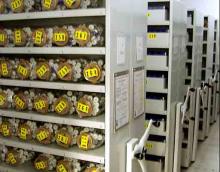 Ironically, in the same week that a team of geneticists announced they were going to try to clone a Wooly Mammoth, Australian researchers announced they would begin cryogenically freezing sperm and egg from the coral of the Great Barrier Reef to preserve it from extinction. The reef has been devastated by human activity, from warming waters to tourism and ocean dumping, and it is not likely to survive past 2050. Scientists have been attempting this kind of dramatic preservation since the 1970’s, using everything from bison sperm to actual human beings (volunteers, of course). The results have been a mixed bag, but it does seem to indicate how desperate things are becoming.

For instance, Norway’s Svalbard Global Seed Vault is a repository of over 10,000 genetically “pure” seeds from around the world, collected from various other gene-banks around the globe. The vault is an insurance policy, at the expense of the Norwegian government, in preserving the planet’s most vital agricultural crops, as well as other flora  from around the world, against the possible destruction or loss from other gene-banks. However, more publicly it has been referred to as the Doomsday Vault, a place that will preserve our agricultural food supply in the event of a world-wide disaster.

Are we really so close to some kind of Armageddon event that we need to start freezing what’s left of the planet? Go to the movies, or read the climate blogs, and you may get that impression. In fact, in the last decade we seem to be fascinated by the end of days. There has been no shortage of world-ending films, Hollywood writers and directors exploring every conceivable apocalypse from a lazy planetary core to glaciers and zombies. Perhaps it’s simply an aspect of the cultural zeitgeist, the spirit of our millennia-spanning generation, that we’ve come to expect the worst. The reality, of course, is that fewer people see their premature end today than ever before, and that we are living in the safest decade since there were accurate measures to make such claims.

I think the real perversion is not our preoccupation with our inevitable end, even to the point that we feel we must cryogenically freeze what life remains (even without the necessary science to bring it back) as insurance against that end. I think the real perversion is that we have so little faith in humanity’s ability to change that we must resort to laboratory tricks in order to preserve our most endangered species. At the same time we seek to use the same tricks to bring back long extinct species, creatures that have no place in the here and now as novelties, the 21st century genetic parlor trick. The real reason to despair is not some imagined apocalypse, but the slow and insidious decent into our own complacent distractions.


Reflections From Above The Swing: Perpetual Motion