Conservatives and defense hawks around the country are blasting Obama’s military strategy for a “leaner” military in the coming years. The media circuits have been buzzing with support and criticism (mostly criticism) of Obama and his defense adviser’s plan to cut nearly $500 billion from the defense budget over ten years, with the majority of the cuts coming in the first five. However, there’s an aspect to this decision that is not making its way into the list of talking points for these armed forces crusaders, and that is the incredible growth in defense spending over the last ten years. 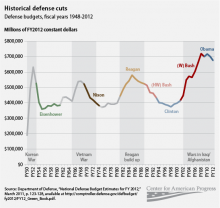 As this table from the Department of Defense’s “National Defense Budget Report” for 2012 shows, the defense budget has ballooned to historic levels not seen since World War II. These numbers are adjusted for inflation, and show that the Pentagon enjoyed unprecedented growth in spending over the previous decade, from 2001 to 2008. In fact, during the second Bush administration, The New York Times explained this windfall as the “myth” of the “two-front war”, that it was “an artificial construct intended mainly to ensure the Pentagon got all it wanted.” The military-industrial complex has seen a heyday in the first decade of the 21st century that it hasn’t enjoyed since the World War II buildup of the late 30’s and 40’s.

What contributed to such unprecedented growth? In a word: fear. People were afraid after the 9/11 attacks, and that fear gave way to anger and paranoia, as it frequently does. The Pentagon, and the defense contractors dependent on it, seized the moment to revive a lagging war machine that had weakened under the Clinton administration in the mid-90’s. Using largely borrowed money (of which over a trillion of our present debt is just the interest accrued), George W. Bush and many of the Republican defense hawks embarked on a public campaign of retribution, fueled by the collective fear and anger of the American people. Every year the Defense Department saw an increase of between $20 and $40 billion, from $412.4 billion to $699.5 billion. And with incredible growth you find incredible waste. Corrupt contractors overseas, inflated prices for everything from bombers to zippers, airdrops in Iraq of over $1 billion in cash (much of which has gone missing), and massive infrastructure investments that now, at the end of the war, are being chalked up at a loss of hundreds of millions to the American taxpayer.

Despite the bloated Defense budget, despite the incredible waste, graft, and corruption of the last decade of large-scale strategic defense budget planning, and despite the current economic and political climate, conservative lawmakers continue to push for sustaining the Pentagon’s budget at it’s current inflated levels. Cutting $500 billion over ten years from the Defense Department’s budget, says many Republicans and conservative pundits who are hoping you’re as short sighted as they are, will “decimate our military”. Actually, over the course of the budget cut’s life, it will drop the Defense Department’s budget to the second year of the War in Afghanistan. A cut of $1 trillion, as some have proposed adding the so-called “trigger effect” cuts of the super committees budget failure, would reduce the Defense Department’s budget to what it was before we waged our “two-front” war. A leaner military perhaps, but only compared the obese and wasteful system we have now.


The Human Psychology of Conflict and Politics


Sound Over Substance: Fringe Fundamentalists And The Internet