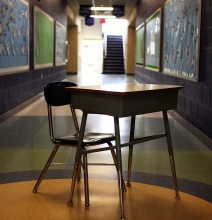 McDonald’s, Ford Motor Company, and Wells Fargo have been incredibly successful because they’ve built their companies around a corporate culture that demands efficiency, productivity, and growth. McDonald’s has also been the subject of numerous investigations into the quality (or lack thereof) of their food. Ford Motor Company nearly failed because they refused to change their business model away from reliance on large, gas-guzzling, over-priced automobiles, and had to be bailed out by U.S. taxpayers. Wells Fargo continues to be investigated for financial malfeasance, corruption, and has also received substantial government money in the wake of an economic meltdown they which they were complicit. This culture, in which emphasis on company performance trumps the wellbeing of the people they serve, is what the U.S. government would like to bring to our nation’s schools.

Michelle Rhee is the founder of StudentsFirst, a well-funded nonprofit with 75 staff members, its own Super PAC, and some very heavy-hitting financiers and supporters (including out own U.S. Department of Education). She has been waging a kind of culture war upon the public education system, demonizing teachers’ unions that, she says, “protect the status quo.” Her organization has built a nation media and lobbying campaign to promote cutting school budgets and implementing mandates that force schools to “be accountable.”  Finally, Rhee supports paying teachers based on student performance on standardized tests, and firing and reorganizing schools that are failing as charters (essentially run like businesses). In Michelle Rhee’s world, schools would be run just like a corporations; productivity, efficiency, and growth. In addition, she has become the poster child for this kind of reform agenda.

Rhee is also the controversial former superintendent of Whashington D.C. public schools. After three years she resigned when the Mayor that appointed her was ousted from office (largely by unions of public employees that Rhee has pissed off during her tenure). Before her leading D.C. schools, she ran a nonprofit that attempted to recruit public school teachers to urban schools. Prior to that she was a classroom teacher for just three years in Baltimore in the mid-90’s. Thus her actual classroom experience is negligible, and twenty years old. In addition, the documented increases in D.C. area testing scores during her tenure as superintendent are being investigated under allegations of widespread cheating. Should these allegations prove true, she may be discredited in the eys of supporters and opponents.

In addition to lack of actual experience and possible unethical practices, Rhee has been benefiting personally from her new status as the “education pioneer.” She has been giving speeches everywhere from charter schools to Wall Street. At Kent State University, the school paid a $35,000 fee to Rhee Enterprises LLC for the priviledge. She’s been granted a number of positions on boards as a result of her organizations partnerships; partnerships that are anti-union, evangelical, and largely conservative. Although StudentsFirst claims to be a bipartisan organization, their list of donors and supporters shows otherwise. Governors Rick Scott in Florida, Mitch Daniels in Indiana, and John Kasich in Ohio are all notorious anti-union. A Pennsylvania PAC (also called “Students First”) that favors a free-market approach to education had Rhee speak at two different events. This PAC also has donated to the campaign of and publicly supports Republican presidential candidate Mitt Romney.

To supporters, Michelle Rhee is a crusader for education reform; the kind of leader that only comes along once in a long while, who possesses the passion, connections, and celebrity to truly change a system. Admittedly, public education needs some serious reforms. However, Michelle Rhee appears to be a convenient mouthpiece more than an independent crusader. With little experience in the actual classroom, she was elevated to a superintendency by an unpopular mayor and made uneducated, drastic, damaging policy decisions during her tenure. However, organizations, companies, and individuals with a vested interest in cracking open the $900 billion dollars a year public education market, found a charismatic and convenient face for what is clearly a national “hostile takeover” in the truest sense of the term.


The march toward an open and equal society


Stepping Off The Carousel